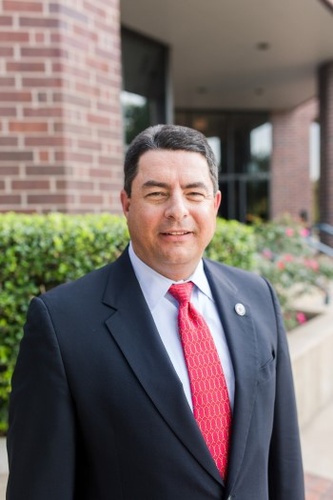 Click to register and enter a $50 cash drawing sponsored by Commercial Bank of Texas.
All Chamber members are entered in a $250 drawing but you must be online to win.

About George Kelemen - Texas Retailers Association (pictured)
George Kelemen is President and CEO of the Texas Retailers Association (TRA), having joined TRA in November of 2015. In this role he provide executive leadership for the TRA team dedicated to keeping Texas “retail friendly” through legislative and regulatory advocacy at all levels on behalf of the retail industry in Texas, in addition to providing excellent member service and value to TRA members.

He returned to Texas after 11 years in Washington, DC, where he served in senior leadership positions for several of the largest and most influential associations in America. Prior to moving back to Texas, George served as the Senior Vice President for Government and Political Affairs at the Airports Council International — North America (ACI-NA), the trade association representing commercial airports in the U.S. and Canada. He served as ACI-NA’s chief lobbyist and led the development strategies to influence congressional and legislative actions affecting airports and the aviation industry, particularly ACI-NA’s work with Congress’ leadership.

Prior to joining ACI-NA, George served as the Senior Director for External Affairs at the American Cancer Society Cancer Action Network (ACS CAN), the Cancer Society’s lobbying arm in Washington, DC. George cultivated, developed and maintained corporate relationships, as well as coordinated outreach to members of Congress, specifically Congressional Republicans. He also spent 10 years at AARP in various government relations and advocacy leadership capacities at federal and state level.

Originally from Houston, George began his career working in Texas, in various political and government affairs roles, as well as in state government, in the gubernatorial administration of George W. Bush.  He has a comprehensive understanding of the legislative and regulatory processes and landscapes at both the federal and state levels, as well as a network of bipartisan contacts and relationships in Austin, Washington, and across the US.

George has a proven ability to effectively communicate with internal and external audiences alike, as well as with decision and policy makers, in addition to native fluency in Spanish. George is a graduate of the University of Houston, where earned a bachelor’s degree in Political Science from. He lives in Austin with his family.
Location:
GoToMeeting
Please join the meeting from your computer, tablet or smartphone.
https://global.gotomeeting.com/join/291440053
You can also dial in using your phone.
United States: +1 (872) 240-3311   Access Code: 291-440-053

Chamber News
Angelina Arts Alliance and City of Lufkin to Host First Cultural District Planning Advisory Committee Meetings This Month
01/21/2021
Updated PPP Guidance from the U.S. Small Business Administration (SBA) and the U.S. Department of the Treasury
01/21/2021
PPP 2.0 - what you need to know
01/19/2021